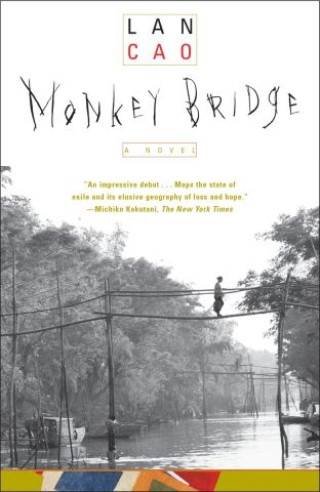 Hailed by critics and writers as powerful, important fiction, Monkey Bridge charts the unmapped territory of the Vietnamese American experience in the aftermath of war.

Like navigating a monkey bridge—a bridge, built of spindly bamboo, used by peasants for centuries—the narrative traverses perilously between worlds past and present, East and West, in telling two interlocking stories: one, the Vietnamese version of the classic immigrant experience in America, told by a young girl; and the second, a dark tale of betrayal, political intrigue, family secrets, and revenge—her mother's tale. The haunting and beautiful terrain of Monkey Bridge is the "luminous motion," as it is called in Vietnamese myth and legend, between generations, encompassing Vietnamese lore, history, and dreams of the past as well as of the future.

"With incredible lightness, balance and elegance," writes Isabel Allende, "Lan Cao crosses over an abyss of pain, loss, separation and exile, connecting on one level the opposite realities of Vietnam and North America, and on a deeper level the realities of the material world and the world of the spirits."

Lan Cao: Lan Cao is a professor of international law at Brooklyn Law School and resides in New York City.