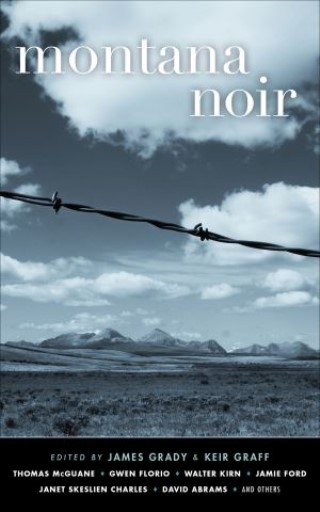 “Thoroughly entertaining . . . from desperate writing students in Missoula to a van of itinerant strippers working the Hi-Line paralleling the Canadian border.” —Publishers Weekly

The Big Sky State may seem to lack the shadowy urban mazes traditional to the noir genre. But in Montana, darkness is found in the regions of the heart, driving the desperate and deadly to commit the most heinous of crimes. Here, James Grady and Keir Graff, both Montana natives, masterfully curate this collection of hard-edged Western tales.

“Terrific . . . Montana Noir is one of the high points in Akashic’s long-running and justly celebrated Noir series . . . varying landscapes reflect the darkness within the people who walk the streets or drive the country roads.” —Booklist

“Montana may not have the back alleys so common to noir but it has western justice which can be quick, brutal and final and that is as satisfying as anything found in the urban streets that typically attract the dark beauty of the noir genre.” —New York Journal of Books

“Certain noir standbys prove both malleable and fertile in these 14 new stories . . . If Montana has a dark side, is anywhere safe from noir?” —Kirkus Reviews

James Grady:
James Grady (b. 1949) is the author of screenplays, articles, and over a dozen critically acclaimed thrillers. Born in Shelby, Montana, Grady worked a variety of odd jobs, from hay bucker to gravedigger, before graduating from the University of Montana with a degree in journalism. In 1973, after years of acquiring rejection slips for short stories and poems, Grady sold his first novel: Six Days of the Condor, a sensational bestseller which was eventually adapted into a film starring Robert Redford.
After moving to Washington, D.C. Grady worked for a syndicated columnist, investigating everything from espionage to drug trafficking. He quit after four years to focus on his own writing, and has spent the last three decades composing thrillers and screenplays. His body of work has won him France’s Grand Prix du Roman Noir, Italy’s Raymond Chandler Award, and Japan’s Baka-Misu literary prize. Grady’s most recent novel is Mad Dogs (2006). He and his wife live in a suburb of Washington, D.C.