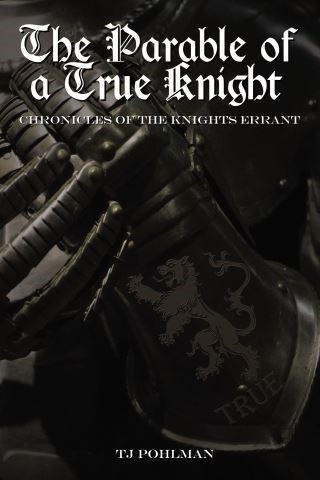 The Parable of a True Knight

Chronicles of the Knights Errant

What is the first thing that comes to your mind when someone mentions a knight-in-shining-armor? Perhaps you think of a valiant warrior dressed in plate armor (naturally), galloping across the land with his noble steed looking for wrongs he can right. Or maybe you image him facing a mighty dragon with sword and shield in hand, braving the fire-breathing monster fearlessly. You may even envision him rescuing a beautiful princess who has been locked in a castle tower by her ruthless uncle until she agrees to marry him. All of these things and more encapsulate the dreams of young Benjamin Knight. And, as he is likely to explain to you, he is not a true knight. That’s just his name.

Benjamin has been raised in a loving home in a medieval setting and wants nothing more than to grow up to become a true knight. That opportunity presents itself in an unlikely manner one day when he meets a young man, Joshua, advertising the Jousting Tournament that is coming to town. Joshua recognizes Benjamin’s genuine love for the traditional knight-in-shining-armor, and takes him under his wing, teaching him that his understanding of knights, while quite popular with the masses, is incomplete.

Our young hero struggles with many of the same worldly temptations we all face along the way; greed, selfishness, a sense of worthlessness and a desire to quit when things get too difficult. In the midst of his journey, he encounters an evil man who draws Benjamin into an equally evil plot to overthrow the kingdom. He is then given an ultimatum: Assist in the plot and have your dreams come true or refuse and lose everything that is important to you. What choice will he make?

This book weaves and illustrates the instructive lessons Joshua demonstrates with the colorful and active imagination of a young boy. Readers should be able to relate with Benjamin and his adventures and hopefully glean from this parable some encouraging truths and moral principles to apply to their own lives.

From earliest memory, Tim has had a life-long love affair with knights-in-shining-armor. With the help of his imagination and an insatiable love for books, he has always found constant companions in the classic stories of King Arthur, The Knights of the Round Table, Ivanhoe and Don Quixote.

He began writing for his children, wanting them to learn the principles of chivalry and respect that he grew up with. He hopes that one day they (and perhaps many others) will cherish these stories as he does.